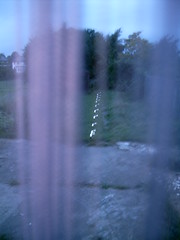 perspective
Originally uploaded by Jeremy Dennis.
I am fat with culture today. I have holes worn in my feet to prove it. Saturday (having briefly confirmed the uselessness of the i-pod nano by observation) we drifted, via some prefab art (Damian said it looked like the excretions of buggy house-building nanobots) outside the Tate Modern, to the Globe to watch Pericles, Prince of Tyre, a play about which I knew nothing. It was rather confusing; it's one of Shakespeare's later special-effects spectaculars, assembled from random reports, widely reckoned to be not one of his better efforts ... I could have done without the cold-looking girl wandering around in her knickers, and the rope-dancers were occasionally a bit over the top, but god knows the Globe isn't about subtlety. We got rained on, hugged (Patrice Naiambana as a griot-ish Gower), and had to duck to avoid both swinging sailors and joyful capers (master of physical play/Helicanus Marcello Magni cuts a fine caper) so it was all to the good, and John McEnery as Pericles! He synched so nicely with my doleful mood:

O you gods!
Why do you make us love your goodly gifts,
And snatch them straight away?

Later, through floods, fury and delays to Dalston, for Andy's birthday party. It's a sad business, going to a party whose central character and object is dead; who remembers to phone the stragglers? Who sets the plans? Introduces people to each other? Who keeps the music playing? Everyone left, of course; but it's so bitty, so perforated, and everything keeps on running away. We got home cold and late, autumn stumbling us into a taxi. I slept deep, not too troubled.

The following day I waded into the garden through spitting rain, in the mood for digging and planting for the fist time in a long time. Planted (shrubs, herbs, bulbs, perrenials, grass seed on the bald patches) a long perspective row of solar-powered lawn lights in defiance of the turning season. They lit up slowly as the sun went down and I listened to some records and caught up with important online tasks like fishing important messages out of the spam-filters and looking at Tom of Finland cross-stitch and other filthy crafty things.

Later we went to see Strings, a full-length puppet animation which presumably knocked its funding through in the brief surge of interest in master puppetry that followed Being John Malkovich. Impressive craft, but let down by generic cod-fantasy plot #2, halting dialogue, and a chauvinistic outlook. Still, for when I wasn't feeling uneasily like I was reading 1960s editions of National Geographic, there was fun to be had with the conceit, the creepiness and spotting the scenes lifted from Star Wars sequels.

I spun a few photos when I got home, and noted that some dark horse called Anthony and the Johnstons had beaten all the favourites to the Mercury music prize. Hang about, hadn't I come across them before somewhere? Oh, yes, of course -- I'd linked to them ages ago over a couple of odd furry-fantasy animations (not that sort of fantasy, alright?) just off their website. Even looked around for a couple of gigs to go to, but they weren't in the right country at the time.

Exhaustion notwithstanding, I slept very badly.

While other universities are rewarding the likes of Nelson Mandela, Brookes is rolling out the carpet for a dangerous buffoon.

Fair makes you proud to be human. Cheers for the heads-up,