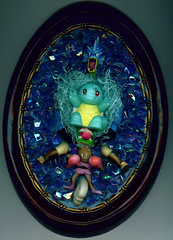 SOLD! Jeremy Dennis
Originally uploaded by crunchcandy.
According to

crunchcandy, Poketotem sold on the opening night. There's a thing.

The rather more obviously by me (possibly not work safe) picture tucked into the back of the frame came as part of the package -- what good value! There's loads of other pictures from the 24 frames show on

crunchcandy's flickr stream, but I'm going to link to her picture of Wolverine in a bunny suit instead, because it's funny.

Having spent all weekend up to my ears in mysterious Scottish castles, lady-snake swamp monsters and dead baby ghosts (for Halloween horror special Dead by Dawn) I spent this morning on the BBC website catching up on the Kashmir quake crisis. The DEC hasn't started an appeal yet (probably will have done by the end of the day) but Oxfam's very active in the area and already have their own appeal going, so I dropped into the local shop at lunchtime to pass on a bit of money. "Following our initial assessments Oxfam is gearing up to supply emergency aid to approximately 300,000 people in some of the areas worst affected by the earthquake," apparently. Big numbers, to say the least.

If it were Valentine's day, and I were to be sending someone a Valentine's card, it would certainly be this one. You'll have to manually select valentine to move beyond the dancing coffee cup. Via