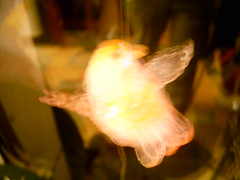 this little bird came from market
Originally uploaded by Jeremy Dennis.
I nearly passed out at Ladytron, saw stars and everything. It was a great gig, although I rather wish I'd spent the mid-evening having a restful drink down the pub with mates instead of standing around in the increasingly sweaty Zodiac getting my feet stamped on by (admittedly very well dressed) punters while watching indifferent support band #539. They pumped scented smoke over us for most of the end of the evening and by closing time the place was slippery with black venue-muck. It was some crazy gig night going on in town that night; everything sold out. Not bad for a Tuesday.

That weird Russian fantasy film Nightwatch gave the impression of not having been able to get the actors it wanted for the scenes it wanted or something but I found well worth the watch for certain scenes; the Lido scene, the witch scene, the psychic surgery scene ... also pleased me by featuring powers that aren't super, but more like having a permanent, incurable headache.

John Peel night was a good enough excuse to head out for a second time this week, to the Cellar. By contrast with the Zodiac, the Cellar had scrubbed itself up completely, and got in some real ale. Bizarre. I drank gin, and watched The Thumb Quintet, while thinking about slow-motion shoot-outs in post-modern westerns, which was very pleasant, then some other band and then got annoyed with the crowd during the last one and left, muttering about how people who want to come to a gig and talk loudly should do so at the back. 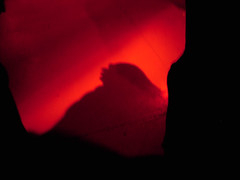 Saw many, many people at the Oxford Beer Festival even though lots of people couldn't/didn't make it. Nevertheless it became something of a stressful evening and there were tears before bedtime. I'm beginning to run out of ways to relax, will nothing work?

Betty gave me cyclamen at the bookshop (a most successful afternoon there) which I subsequently took to the noodle bar and then to the pub, along with a sad CD ... met up with TimScience to see Los Diablos play at some weird birthday celebration, where I resolutely ignored people I half knew. Conversation about monsters and sounds and other strange things made for a night more pleasant than most.

The Curse of the Were-rabbit I was perhaps not in the mood for; or maybe the excessively long lunch that preceded it or the hordes of small children or the weird child-military marching band we passed on the way their had sapped some essential humour; but although I could see it was excellent in pretty much every way a film could be, I ended up struck forcibly by the bleakness of Gromit's existence and obsessing on this during the long wet walk home, eventually finding hope in the idea that he might, after the film was gone, go down the doggy bar with Quartermain's savage pit-bull, to talk shop about their impossible masters.
Collapse