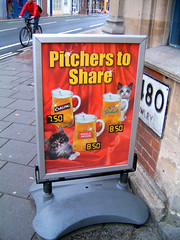 Lunchtime Thursday I let Work Experience Lass go off to Pizza Hut with her mother, while I tried and failed to go into Avid Records, which is closing very soon. I don't honestly know what to do. Should I set a budget? Go mad? Forget about it for the week it'll take to go away? Instead I went to the market where a lady with a huge furry hat sold me four antique cocktail picks for £1 each. There's probably lead in the silver, but I expect they will only see ritual use.

Strange moment on Friday; a woman walking across the Pelican crossings below my office window, singing a sing-song made-up song, like toddlers do, do you remember? About what they're doing, and what they're seeing and how they they're feeling. All the people around her ignoring her as best they could. I couldn't hear too well from three stories up but she seemed angry, with someone or something.

Saturday at the bookshop, Jen the manager told me she'd seen us going home the night before. Actually, I think the word she used was "reeling" but as it had been at some time well past three she was hardly on the moral high ground. I had been dancing, but not reeling, at a really good Halloween club night consisting of Digitonal rescoring The Shining and (in the oh god I can't quite believe this is happening zone) a fantastically freaky horror/guitars/monster audio-visual set from Hexstatic. Sheer wonderfulness with masks on.

littlegreenboat was in town and needed lunchings) the barman said he would serve me but only if he could plug me in; I smiled and replied, "I glow under UV." Some days, dressing up is its own reward. White Horse is rather nice beer, too. Which makes me wonder; is there a god of beer, as Bacchus/Dionysis is god of wine? Ran into an unexpected friendset (

ginger_princess + 2 lj refuseniks) but they were all in a shit mood after their boiler broke just as they got back from a Halloween party the night before. Washing out fake blood in cold water = no fun.

That throwaway query about the god of beer. On reflection, I must agree with

sophia, it is interesting. Although also, rather long, so under a cut for your convenience: