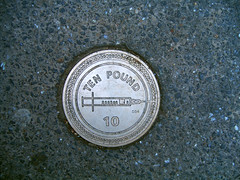 brass plaque representing local culture
Originally uploaded by Jeremy Dennis.
When I saw this flagged up in the "Cowley Road Matters" plans, hideous visions of ethnically diverse children, abstract patterns representing educational achievement and stylised Morris Motors cars went through my mind. But it looks like somewhere along the line, the artist broke free of the committee, and produced something much stranger and rather cooler.

In addition to this one, there's a prostitute on the corner of Magdalen Road, a homeless guy by Manzil Way, and an ad for a Curry House near that NHS dentist somewhere, and more going up every day ...

Except that last night, I swung by this one on the way back from a gig and found it had been covered up with a splash of tar. Hmmm.
Collapse