Friday went to see The Brothers Grimm which ... well, I enjoyed it. Nice lines. Reference: The Twelth Kingdom, The Company of Wolves, Brotherhood of the Wolf and the less annoying moments of the Hallmark fairy-tale adapatations. Although bad casting of (most of) the lead roles and slapping down the wack and horror in order to keep it 12A hobbled things. Afterwards drifted round to help

concourse understand what Mullholland Drive is all about. The moment when everything makes sense is of course a private one, not to be shared, but we established beyond a doubt that it goes well with lollipops.

I need new headphones, but none of them appeal apart from a sony pair with no price. I found another pair of my current set (now producing an unwanted buzz) but *they* were a bad replacement for something not made any more. Everything on sale now seems so creepy: I don't want something that "expands slowly in the ear canal to provide a custom fit and maximum isolation".

Saturday didn't go to Novacon or the Zodiac's birthday celebrations. Instead stayed home with the garden, getting the bulbs in before the frost and giving the ground elder which stretches its tendrils of evil beneath all Florence Park, prising at our foundations and splitting our patios, its last dose of savage contact poison. I'm not aiming to kill it (it's a bit too big for that) but to persuade it away from the house. We'll see: the big fight will be next spring.

In the evening, too languid for out, stayed in and finished watching Cowboy BeBop, finally finding out why the end of the series never made it onto any of the best-of recommendations ... bah. Sub-Woo shite, all pigeons and significant silences and no tying up loose plot threads because, oh, that might be hard. Or interesting. Hmf. To balance that, read then Fly by Night, highly recommended! Kids book about religious conflict, a vicious goose, and why the best thing you can do with your home village is leave it. Some really interesting stuff about household gods. Great characters. And I'm not just saying that because I know the author.

Sunday we got the box hedge down, and I found that, in addition to the savaged garden light, something's been at the organic blood-and-bonemeal soil improver. Something with really quite large claws. I wonder what? Fox? Badger? Or generic clawed sound maker? I dug in the compost while

damiancugley phoned his parents, one after the other. Just as I was getting the fourth tiny box tree in, his Dad broached the topic of children ... I suppose that he's not the only person out there thinking that's the next obvious step ... in the spirit of embracing my fears, I later ostentaciously paid for his entry to a random laptop gig which turned out not to be as good as I hoped. Although, to be fair the last two laptop gigs I saw were Four Tet and Luke Vibert which may have unreasonably raised my expectations in this area.

Nailbombcult was fun -- good hacker posture, knelt down for the tricky bits! Cute -- and it was great to see Nervoustestpilot again (I keep missing him) although the music he was playing really needed to be in a tent somewhere with a lot of other people who wanted to dance. Knifehandchop, though, who had come recommended! (sigh) played one of the ugliest sets I've heard in a while. The samples were all pretty obvious or contained shitlots of swearing, and although the bass was sufficiently banging that as I reached for my pint (tucked safely onto a shelf) it leapt suicidally towards me spattering a pile of strangers' coats, my pop-a-cap-in-the-ho tolerance was quickly exceeded and we beat a hasty retreat. On the way out I spotted the barmaid and felt somewhat awful; there were (a few) other women in the room, but she was only non-white there. Urgh. Downstairs, the barman was staring at the vibrating ceiling and muttering darkly. Still, it got me out of the house, etc. And one of Nervous' new tracks was just my sort of thing. 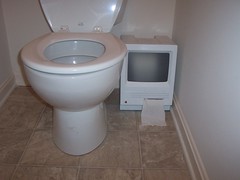 My Apple iWipe
Originally uploaded by sMoRTy71.
This picture of an antique mac adapted into a bog-roll holder is included especially for

mzdt, who seems a little under the weather at the moment, but others may find it amusing, too. Via Groc, whose enthusiasm for the new cyberman design confirms my opinion that they are, hmmm, a bit *too* stylish to be scary. I mean, check out those boot-cut leg plates, over-long sleeves and somewhat cartoony skaterboi feet. Without even starting on the g-string. Wonder who's going to be doing the voices? And whether we'll get a partially cyberized Billie? Perhaps I could post Captain Jack/New Shiny Cyberman to