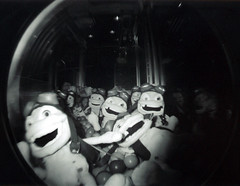 Peppermint tea will salve my soul. Or settle my stomach. Discovery most unpleasant this morning that I got rid of all my formals when I moved house. Reasonable enough, but. Christmas party season opens tonight. So visited Earth 2 Marks & Spencers at lunch to buy multi/sparkles lurex top and "clown beaded" legolas tunic (£9 ea.) Still dithering over which to wear, where.

Yeah, All Tomorrow's Parties, it was fun. Barracks of fun. I have a hideous cocktail injury from where I got overenthusiastic slicing up a lemon for the Diamond Fizz (gin, lemon juice, a little sugar, top up with cava) and I'm not sure the shoes made it (having waded through rain, hail, ugly carpets, slush puppy, mud, sand, sea, and drifts of dead starfish and knackered indie boyz) but on the whole, brilliant time. We even got helicopters and rainbows on the way there, a few of my favourite things (while on the phone to hedge suppliers who had failed to deliver hedge the day before because it was "in the wrong cage"). I took cameras. Photos will come.

Some stuff you should listen to: Delicate drag-king sister-band Cocorosie. They're lovely. I have just directed you to an "under construction" page and it's still lovely, that's how lovely they are. Jaga Jazzist, it was a big weekend for vast buckets of intrumental noodle, but theirs was mighty superior example of such thing, and they had a lady in a hot-dog dress playing a tuba. Quintron and Miss Pussycat had a mad green dinosaur dress, glove-puppets and some sort of keyboard/car hybrid (one of several bands/events that contributed to that feeling of stuck in a warped dimension based on 70s children's television that permeated the weekend), and Holy Fuck, who were doing something awesome to a slightly checkbox rapper called Beans. That's enough for now.

I'm going to cut out and keep the thanksgiving spam message from Russia, I liked it:

I really ought to sort out my tags position. Not to mention design, website, archiving, backup ... urgh. From LJTags: Suicide dynamic over the last week.