At the Oxfam Bookshop. Turned out to be well worth it, we took over [amount deleted], mostly in last-minute toilets and goats. Present to myself of a dark modern art book from the Bookshop provides thought of the season:

After pushing the black button the following occurs: the bird on the right lifts - a little askew - his head until he looks at the other bird. Then he slowly pushes the parcel to the bird opposite him. The latter refuses; sluggishly shakes his head. Rightaway the bird with the parcel lowers his head again and takes the "present" back.

Courtesy of Michel Huisman, from a book of photographs of his automata. We went down the pub after, for a well-earned beer. The pubs all smell sickly this winter, though from the new mulled wine they have on tap.

Christmas Eve suffered almost every hitch imaginable, from power cuts to overcooked pigeon to the failure of wet branches to burn in wet air, but at least I got to play the (fairly) gracious hostess. I should do more of that next year, I think. Christmas (at

oxfordhacker's) involved so much relaxation that by the end I was starting to develop bedsores. And probably gout, from playing the "drink when you want to slap Micky game"* with port in a new and very scientific-looking vodka glass that

tinyjo must have bought in Ikea while I was briefly glancing in the other direction. She has the skills, specifically mad roast skills.

mr_snips, who is wise in he ways of obtaining dodgy anime. I also ate some chocolates and cheese. I still haven't phoned any of my family or done the washing up from Christmas Eve.

Two minutes ago, it was bright blue sky out there! 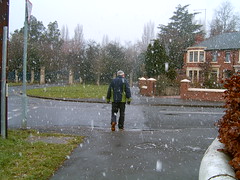 Currently doing the washing up, as it's started getting a bit, um er. Turns out we used every piece of crockery in the house.
Collapse