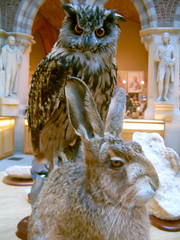 FINALLY QUIET INSIDE MY HEAD
Tuesday, February 14: 9.30pm
Depicting a woman's madness through conversations with her best friend

DONA NOBIS
Monday, February 13th: 8pm
New Writing Festival. And I quote: "A strikingly honest examination of belief systems and relevance in a claustrophobic naturalist play." You have been warned.

and possibly the most romantic option yet:

BANK
Tuesday, February 14: 9.30pm
by Sam Thomas. A hilarious short in which four men set out on a team-building exercise in the middle of nowhere...

Sadly, the Oxford student theatre scene being what it is, I fear it's unlikely that they'll gay up.

Apparently all of the above (and more!) are still going (if you too are at a loose end next week) according to the slightly pitiful email I got through this morning. But after last night's "entertainment" (it was a hard one to give a positive spin) I'm feeling a bit warned off student theatre -- having seen a couple I'm coming to the conclusion that this year's fashionable elements (short musical numbers, simply-simply costuming and doing accents) are not to my taste.
Collapse