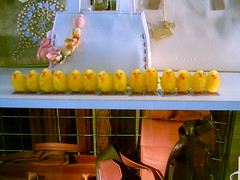 return of the cake-topper chicks
Originally uploaded by Jeremy Dennis.

Happy Easter! The chicks hope you had a good weekend. Can't you see it in their beady little eyes? I had a thoroughly religious time. On Good Friday I bought music and went to a gig (for He is the Lord of the Dance You Know). On Easter Saturday I watched Darren Morfitt die and be reborn as David Tennant, who healed the sick, and stood in judgement on catholic cats. On Easter Sunday I went to see The Mighty Boosh, where Vince was raped by the easter bunny, Howard cast off his attire and stood god-like in nothing but pink pants, and Naboo rose from the dead through the oral application of an enormous ruby. I was also peed on by Bob Fossil, but that's one of the dangers of Row J. Easter Monday I ate hot cross bun loaf and bacon (a taste sensation!) and drew a picture featuring many crosses (of tit tape).

P.S. You can give the chicks irreligous thoughts, just like you did last time.