"How are you doing?" asked Jenny in the corridoor. "Um - ok," I said. I must have been unconvincing. "All recovered now, are you?" she persisted. "Yes, I'm much better," I said. It's um-ok or an hour's whining at the moment and I really don't want to go into all that not her not now, but I drew some of it down into a doodle here which is healthy I suppose. Back at work. They've replaced the toilet that wouldn't flush with one that persistently gets blocked. I really did think toilets were a solved problem but oh well. None of my plants are dead. Not much joy getting any comics done at the moment. It's motivational, I think. More nightmares. Initially they had a sort of Cronenbergish charm, but right now I just want an uninterrupted night's sleep.

But maybe that's no surprise. 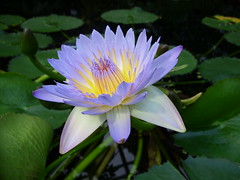 king of the lilly pool
Originally uploaded by Jeremy Dennis.

Everyone needs flowers. I still have lavender, fuschia, rose, hollyhocks, dandilions (boo!) and some alpine whose name I forget going strong in my garden. This isn't in my garden, it's in the Botanic Gardens. It's nice there this time of year if you can make it through the gate before sunset.