On a similar theme, a new spambot:

and marketing pitches
and lots of
"true toys"

over and just play.
their own passions,
But so does living

Walking in the mornings is so calming. Unlike the HIDEOUS STENCH from the registry office. (I work over it; the stairwell's been acting like a chimney. A chimney of STENCH.) Apparently they're cleaning the stairs. With week-old kedgeree, by the smell of it. If you were planning on getting married in Oxford, don't.

So I was talking figure drawing for comics with

damiancugley and mentioned Alison Bechdel's tribute to her Cat, which he hadn't seen, so I reproduce the link here for those that may have missed it. She uses photo reference of herself, posing, for her comics, and most of the pictures in this come from that. It's a fascinating peek into her working technique as well as the story of a cat, passing through. Watch as she practically metamorphoses into an irritated Stu or frustrated Raffi ... she's also posting short, loose autobio strips over in her blog (feed is

dykestwofstrip) which I'm liking very much.

Remember my mutterings about Portillo trying to save the Hyacinth Macaw on morally suspect ITV show Extinct? I'm fairly sure the Tiger won, but never mind, because another project's got hold of the Macaw's Patanal habitat, a bird project called Guyra -- and you should love them because they post pictures like this one on the internet.

I tried to buy a Plush Chthulu and they've been banned! Recalled! Sent back to their home dimension! What can I give as a disturbing children's toy now? 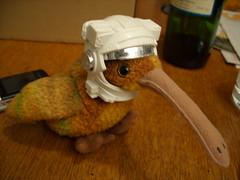