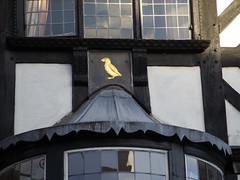 Apparently Flickr's in the news today, over its long-ago-announced decision to migrate everyone to Yahoo sign-ins. It makes little odds to me -- I accidentally merged my accounts a couple of months ago by clicking the wrong button on a sign-in page. It's made no difference at all, except that Flickr no longer says to me, "you must be old-skool, rock on" whenever I sign in. Which is a bit of a shame as I was an early adopter but pfeh. Smoother than merging my blogger ID with my google ID, which had an altogether predictable entirely unexpected result on my LJ feed.

Anyway, I've just put up a few photos -- mostly from Ludlow -- from my weekend away, on my Flickr stream, including the Deformasaurus and the Ludlowsaur and a guy on Powerizers.