We were at a strange sort of school where we were kept in one place and crammed on subjects considered to be to our liking. I was specializing in maths and physics, so was a blond girl. We met and spoke about our suspicions. She disappeared, and I was questioned by the computer that was in charge of us; I did not betray her suspicions, instead saying she had run away with a boy she liked who had also disappeared (we were not allowed romantic relationships).

Very soon after this, a giant industrial lift and some doors we had not seen before appeared in our classroom. Some of us went into the lift, but DanWNLJ nipped through a door to see what was there, and came out again through the lift door, transforming it into a door into the back office as he did. The people already in the lift (including

timscience) had already gone and the lift was now inaccessible. Worse, they had brought in wild animals like tigers and leopards and red pandas* to "clear the area naturally".

I went up a short set of stairs to where two small solemn children were operating some machines. They answered my questions about why we were here (we had been brought from the past as genetic material and grown as clones to bolster current genetic diversity; they had brought us as a "social group" (although some people there I didn't know) to aid aclimatization; that we were skilled up nominally to bring us up to date but actually to bolster the current skillbase; that (all) this was controversial) but not about the lift. I understood that they could not leave, as they were children born from us, the clones. I found some switches for the lift, but had to guess at the settings. We got the lift back, though.

Inside it began to shake and veer and

damiancugley had to correct the course using controls like green lights that appeared on the inside of the lift. We crashed out through the bottom of a dried out swimming pool, dislodging a talking epic-scale bust (who was annoyed). Another statue/water feature (collapsed) filled in more of the back story (but again was unhelpful about where lifts were supposed to end up). I made friends with weird dragon-like slugs that lived on the statues, which turned out to be less cute than I initially thought.

I noticed DanWNLJ hadn't come with us, but

bluedevi cheerfully assured us that he had come inside an "orange phone" (like a small brick of orange plastic with embedded tech) and she just had to get him out again later.

All the time, rows of people sat on deck-chairs along the edge of the dried-up swimming pool pretending not to watch us from behind their papers.

My main thought on waking up was that this could be true. You wouldn't know. Just a faint ache as the material was brought forward in time (it only worked for tiny amounts) and a far off ghost self living in future time.

*Are these dangerous? It doesn't seem likely. Also some form of unfamiliar golden lemur. Our first hint that we were in the future. 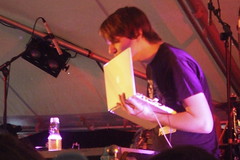 And look! I do. This is a musician and a pervert a scholar and a physician. Computer kiss = weird vocoded noise. Although one of the highlights of the festival, linking to them won't do me much good as they haven't put up any new mp3s for about five years. And I know that they're mainly producers nowadays but damnit some of their songs are so compilation-friendly!

Other than that, it was much the same as ever. I bought a pot, ate candy floss from a candy-floss maker that looked like it had been bought off of e-bay, enjoyed some home made raspberry ripple ice cream and saw some (local) bands (for local people).