I have posted up some pictures of the Lord of the Rings Eating and Drinking Party on Flickr, now. They're of indifferent quality, because I felt the digital unsuitable to running up and downstairs with greasy fingers while somewhat slightly drunk , so used a Tesco's Value Camera (it's cheap and --well-- cheap!) instead.

If only I'd extended the same courtesy to my knees. 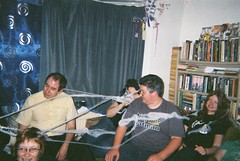 Just a few pictures of things which were really pretty (like Denethor's elaborate chicken salad) or really odd (like Gollum's fish ) inspired me to risk the digital.

There's also a picture of pacman ♥ ghost from the Halloween party. Speaking of which. Mysterious post-party items.

1. Lord of the Rings Trivial Pursuit DVD. Whosever it is, you need to take it back home now.

2. Some really nice turkish delight and coconut rolls (which we ate when we ran out of Frys Turkish Delight (dadada dadada dadadaaa da da daaa)). Who left them? I want to thank you. The licorice came in handy too.

Um that is all, I think.