I've not had time to do much more than twitter recently. Work suddenly filled up with a mess of people trying to get things done this year just as I went to see my sister (and family). I've been clingy and tired and getting ill a lot. I suppose that I must need a holiday. Various asides, for memory:

A beautiful purse covered with beaded peacock feathers in the window of a shop on Queen street; I miss the photo, and it sells out, in a day.

I invent new game to play with nephew: push him around the house in his little truck, singing the archers theme. Whenever I get to end of the melody, I yell CRASH! and crash him into something. Name of game is Richard Hammond. Nephew at golden age where he can run into you at full tilt without doing damage. Well-timed visit.

Elle co-opts a burly dutchman into helping me take nephew's pushchair up stairs at Oxford Circus. Burly dutchman sprouts teammate and they whisk him up one two three flights of stairs! I'm thankful.

P.S. There were lots of work dos. 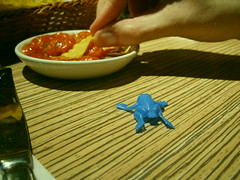