timscience and his sister took their mother to see the Terracotta Warriors at the British Museum. Us dependents (the nephew and I) tagged along to help them with the Dim Sum and fantastical tea before our allotted afternoon timeslot. And then the strange and beautiful warriors themselves, set in an educational lattice of artifice and decoration. There's no denying that there's a seductive aspect to these dimly-lit models; the power of ambition and vision is astounding. But there is also a madness that starts quickly to seep through and in places the sense of copies of copies becomes dizzying; one excavated diorama showed in model form how the warriors were made, step by step, even bringing the workers into the picture. And while it was beautiful I found repeatedly my marvelling at the careful variation and unique detail of each warrior, the hairstyles, the armour, the carefully tied shoes, gave way to an odd disquiet at the Emperor's unhealthy obsession with survival after death, with preservation, and with creating copies, copies that were in some sense were more real, more enduring than the originals. After all, one general, one courtier becomes another and another as years go by. But these remain in a frozen life after death, enduring in clay and stone. Speaking of which, the one below is made of marzipan, photographs within the exhibition are forbidden. 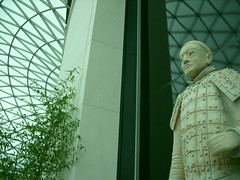 And then there was the birthday party. We both had flu by now and were fighting to party through layers of flu and some slightly frightening pills we'd found in the local pharmacist. It was a stellar party, however, and Tim's day was made when a stray cat he'd been worried about last year turned up, plump and cheerful, wearing a new flea collar and a christmas bow, to beg for strokes and snacks. I also dressed as a pirate (evidence attached). 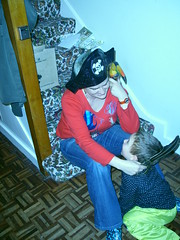 We stopped at the wrong service station, the one before the roundabout that's always being rebuilt. It had a Little Chef, though, so we went in for breakfast. "It's going to be half an hour," said the girl who showed us to our table, "the chef's..." she waved her hands a bit "...run off." We did eventually get breakfasted up, but by that time, the manager was looking at the back of the chip and pin device with the air of someone looking for the magic men who make the numbers appear. Fortunately, we had cash, and enough pills to make it home. ...and when we got home, Teazel got to play with the remote-controlled tiny tanks! 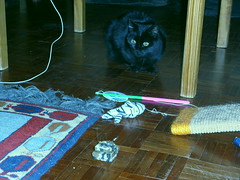