I got valentines spam entitled "The ten best things to say to a naked woman". Inside, the single line of text read:

Imagine being huge thick and long even when flaccid!

I've had a busy few days. I saw Polysics which involved more jumping around than I could really handle (I'm still getting my gig legs for 2008) and liked support band cutting pink with knives enough to buy their candy coloured vinyl. And also Art Brut, who are over on the Flickrstream, along with the electric paper plane launchers and an artist's chameleon using mini-tanks for roller skates (video on click-through). 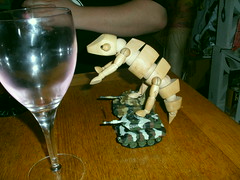 I saw a woman in the street walking a ferret on a little lead! A flop-fringed whippet-thin indie boy said "That's disgusting!" then went and chatted her up.

Life is so inconsistent sometimes.
Collapse