Of all holidays, I think easter is my least favourite. This year, it was excitingly complicated by a small press comics mart, which at least actually is my subculture, so it's less awkward and painful than Eastercon. I nevertheless got dragged into a conversation about Dr Who, Torchwood and Flash Gordon that I rather wish I hadn't, though -- my opinions on their relative merits run (as ever) counter prevailing fan opinion, and I lack the urge to defend my opinions. It's just trash TV, and people's tastes vary -- you don't like Flash Gordon and think Torchwood is worth watching? Fine. I do and I don't. Is there really anything else to say, except "you're wrong!" and "no, you're wrong!" I always get suckered in, though. It's aggravating, and I wish I could think of an elegant sideways conversational shift to stop it from happening. You'd think I'd have that one cracked by now. But no. 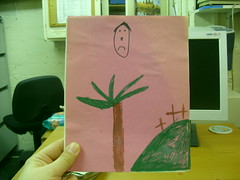 Easter. Grim, cold, and complicated by birthdays. Light finally good enough to see the dirt in the house and a garden where the weeds are going hell for leather and everything else is dying in the frost, refusing to show any signs of life or waiting to be planted. At work, it's the end-of-year project and target hysteria. At home, it's the time when you have to accept that this year isn't the one that's going to see you sorting out your life and making radical changes either. The ants wake up and the drains start smelling. The gales and hail rattle the loose tiles and flatten the early irises, and then the slugs trundle out to eat anything that's been left upright. Hurrah for easter. At least it'll be a year until the next one. 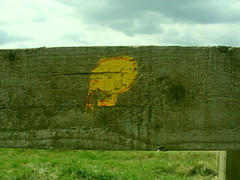 Edited to add: Moggy Malone? Computers? Poodle Princess? What has happened to Rhubarb and Custard?
Collapse