Saturday at Camden Lock Market was interesting. I've not been there for years (not since the mid 90s, when I was regularly placing my comics in the eternal Mega City Comics on Inverness Street) and after a full day's wander and explore (inbetween trying to sell people tiny comics about tea and owls, with moderate success) came back convinced that it was not so much historic as futuristic, in a haphazard sort of way. Apart from the fact that no-one gave my colourful appearance a second glance (and you may laugh, but only yesterday I had someone in Oxford leaning in to let me know how horrible and stupid he thought I looked), it had the whole "den of iniquity and vice" vibe down pat, and a sustantial number of the wares looked like exactly the sort of stuff you'd find for sale in a spaceport shanty town. On the other hand, I failed to find either the Charlie's Angels t-qualisers or light-up fun fur, so it's not quite in the future yet. Nice to see you all who dropped by, sorry to anyone who tried but couldn't find us. I'm re-stocking currently, so it'll be the weekend before I can send out any orders! 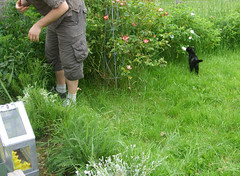 On sunday, next door's kitten came up with the most fun game ever. I'd try to pull up a weed, and she'd try and pounce on my hand! Ow! I've not seen her for a few days, thanks to ther RAINS OF DOOM!!!! I expect (Oxfordshire got its month's rainfall in a day again). That day, I was up in the Unipart building (an ex chemical works on the outskirts of town) on a course, learning the quirks of a web survey construction system while the people who'd come from further afield watched the flood alerts nervously.

Meanwhile, back in the garden, there was a general decision that it was autumn, and a bunch of geraniums and the new pink rose got mould, and a fairy ring popped up in the front garden.

It's been a week of heck at work so far and more is yet to come, alas. But on Saturday I will go spa and that will be extremely pleasant. Time for one more thing? Oh yes:

Link to an extremely cute video of a baby emu bumbling around a sitting room on the BBC website.
Collapse