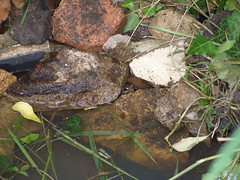 New pond has received the frog of approval! Frog is right in the middle of that shot, peering out from the stones. It's clearer bigger (on click-through). It's a bit of a small pond, but I only had so much old carpet (for lining the hole) and, indeed, space. Have ordered a solar fountain off the interwebs (they've gone down since last year) and now we only need a rainstorm to finish the job -- two slimline waterbutts were not quite enough water.

This morning I had a dream about walking across an open-cast salt mine in Russia. It was beautiful -- the bright sun was glinting off the salt flats, and gleaming large machinery in blues and greys and trucks in vivid primary colours speckled with salt-dust were bustling around, clusters of foremen and workers in hi-vis jackets, wellies and hard-hats all going about their business. Tim and I were heading for a small train station, where we would catch the next train down the line, to meet up with the some friends. A woman with a huge soft fur coat and a huge soft fluffy dog was on the platform, distracting the guards, which made me hope that they wouldn't notice that our tickets were perhaps not quite in order.