Had one of those dreams last night that's so horrible and distressing you superstitiously refuse to talk about it, no spreading that shit around. I woke up, bolt awake in bed 4am and a handful of minutes not sure who or where I was just that I was so sad, so sad. And it wasn't even real. Why does the brain do that sort of thing?

I remember, as a teenager, having a series of dreams which rode on terrible hypotheses; your sister is electrocuted and you failed to stop her, you have been sentenced to death and will die tomorrow, something is eating you and you have to get it into the cage, night after night, as if something were testing the limits of my emotional resilience. Strange times, strange nights; and I would not want to be back there. Just a blip, I'm sure.

In the meantime, happy friday from this perky lion whose petunias do not accessorise: 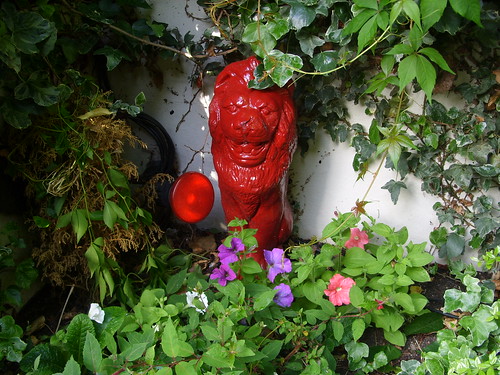