This also happened today:Text message microblogs broadcast from cleanskies on Twitter by LoudTwitter

Attempts to draw last night thwarted by variety of timecrunch and discomfortables (including a phonecall from jubilant little sister, who had a good 12 week scan and is therefore officially pregnant, yay!) meaning I didn't finish comic, bah. Still, it is half drawn.

In the meantime, and faced with tightening belts everywhere, I think I may be becoming a gardener. Second job, obviously. Who can manage on only one nowadays? Oddly, I only recently found out that my father was doing a gardening business before he jacked it all in to follow a combination of Ruffled Feathers and The Self Sufficiency Handbook in rural Dorset (when I was six). Came as a surprise to me, although I suppose all of the leet landscaping skillz (I helped him build lakes and such as a child) must have come from somewhere.

That reminds me of that "three things you've done that no-one else has" meme. I think that none of you have delivered Pochards to Elizabeth Frink's husband -- although I suppose there is a chance that

whitehart has, as she is living proof that no matter how bizarre you think your parents' life choices were, someone else's did pretty much the same.

And on that note - happy friday. Have a cookie! 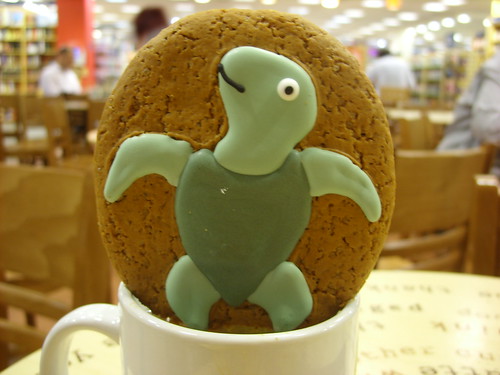