This also happened today:Text message microblogs broadcast from cleanskies on Twitter by LoudTwitter

There was the exhibition first, of course. We had an opening! Some people turned up! Some I didn't even know! I love this group shot by Matt (we all look very practical!) and there's also a close-up he took of my bit, typically spidery and scrunched up in appearance. White space. I've heard of that.

It was a thursday set-up, which made it slightly tricky. I took a day off work, other people couldn't make it at all. Pretty rough on poor

ellenlindner, whose artwork got lost in the post. We've all been there, but still. Annoying. 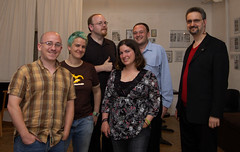 CAPTION Collective Cropped
Originally uploaded by The Glass Eye.
Then friday was a double-decker. First up Ballboy at the Ex. Ever hapless, Ballboy have nothing from their new album up on their myspace, so here's a slightly rambling podcast containing the track I want to tell you about, which is called Godzilla vs. the Island of Manhattan. I bought loads of stuff, and may have promised to live sketch at a future Swiss Concrete gig but everyone was a bit excited by the beer and the big vehicles zooming by (the Ex is on a main road) so we'll see.

bluedevi's party, where we all had to bring something we were proud of to show off. I brought a book adaptation project* I'd abandoned for ages, having been reminded of all the book-work when I picked an oddly-highlighted page of The Magus as the background for my self portrait for the exhibition.

Saturday I did the bookshop, which was quite quiet. There's a massive donation of vintage annuals in at the moment, if anyone's feeling the lack. I'll happily tell you what if you're interested -- but war, adventure, cars, girls, TV and classic British characters are well represented.

In the evening I went to see The Dark Knight, which (annoyingly) came without a Watchmen trailer. What I've seen online so far looks good, though how well it'll make it into the 20th Century without looking hokey ... well, we'll see. I don't have an enormous emotional investment in it, which should help! Ah, oops, should have been talking about the Batman film. Well. It's got some real wow moments, but overall left me quite cold. Something about the plot, pacing, and plausibility didn't quite cut it for me. That said, effects and ideas are very interesting. And the Joker in that red wig? Brrrrr.

anyway, enough about my weekend. Tell me about yours.