Time crawls by. The paperwork grinds on and the pond fills up with water. Still no sign of anyone buying Tim's flat; apparently, sales are down to one per week for most estate agents, and all the various inducements to first time buyers seem to just be making them more nervous. I spend my time around the house fretfully disassembling bits of it to send to sisters, nieces, charity shops, recycling. I'm busy at work, and elsewhere too. I've started gardening, for money. I should print some moo cards up really -- "light gardening, evenings and weekends". The Oxfam book shop is busy, too -- buried under donations and understaffed enough that that seems like a slog. Last week saw an enormous donation of self-help, critical theory, diet, health, feminist theory, personal development, social theory -- a whole life of restless, relentless self-observation and self improvement. It was exhausting just unpacking it, and not only because most of the books were big, shiny and expensive.

I'm in another exhibition, too, though it seems weirdly secret -- The Harrods UK comics exhibition. No sign of it on the Harrods website (although "Meet Charlie and Lola" found it into news, I see) but it is an absolutely massive place, and they probably have to pick and chose what they promote. There are some directions here but I think they are to the opening (which was yesterday). Oh -- brainwave! Yes, of course -- Rich Johnston's column goes up today and, being the curator, he is of course talking about it. Scroll down for some photos, you'll eventually find them, along with the news that it hasn't actually officially opened yet, but is 75% up. Must make it out to see the show in situ, it's up through October I think. I haven't been to Harrods in years, I remember that they used to have a sign up forbidding ripped jeans. I remember going in there sometime in the 90s with my friend who spent alternate months on oil rigs and partying, in ripped jeans, and (he was buying alcohol I expect, he ususally was) drinking calvados from a bottle the food hall manager had accidentally broken. Broken glass and ripped jeans, that's my memories of Harrods. I don't know if I will, though. I'm very busy, and having problems getting enough of my brain away from moving/not moving to do anything involving planning or getting out of town.

So, I have been buying myself toys. I have managed so far to resist the siren calls of cut price digital SLRs, but I finally decided to slake my curiosity about the Pogo Printer. In my defence, I had a very, very big voucher. 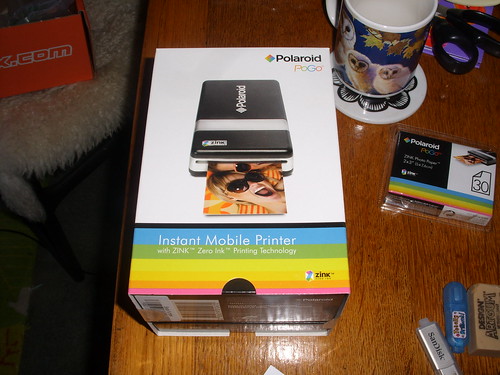 If you click on through I've annotated about six pictures on Flickr which should answer any questions you have about just how cool a tiny thermal printer by Polaroid is.
Collapse