Been a very busy week, finishing off my Whores of Mensa strip, being poleaxed by migraines (apparently there's a weird flu going round) and dashing off to the Oxford Beer Festival last night where I stayed several hours longer than I intended, oops. I only got one clanger, which is really good for a beer festival -- I took no notes, but mostly it was good, especially strong on Ruby/Autumn ales and some very nice English Wheat beers (I had a great one called scarecrow or something) -- although the "Munich Style Lager" is anything but (still nice though). A warning to anyone going over the weekend, the food provision is appalling, eat before you go.

As the only other thing I've been doing (apart from work, which has been mad -- and, speaking of which, is anyone local interested in a small web development job?) has been sitting at my desk (newly set up in

timscience's studio) and drawing, happy friday from the artist's desk.

I was using the little chthulhu head as an artist's reference tool, the rest of the gang are cheering me on. 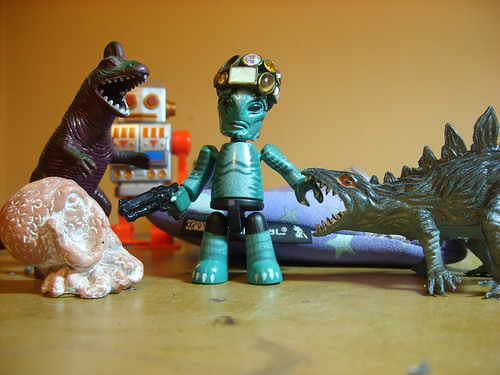