It was a faff getting there (Notting Hill is partially destroyed, along with the usual Oxford bus route into London) and I arrived too late to be fashionable -- you know, about at that point when everyone's agitating to get to the pub.

But, I can't deny that it was a kick! I went in the huge grand corner door, and asked the doorman where the exhibition was – he directed me through mens shoes – a rich world of wood and brown leather – and there it was, down a two half-flight of escalators which looked expensive but somehow obsolete, oh Harrods. Adopting so expensive and so early that you end up with the best of the past on show forever. 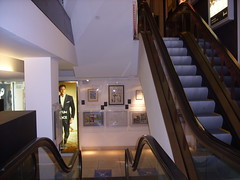 And there, at the bottom of the escalator run, tucked between shirts and shoes, colonising the columns that support the huge escalators and overflowing onto a scrap of wall shoved up against a back-room door was the exhibition and the first thing I saw was my piece, behind a slightly scuffed security screen, shoved over in the corner, yet somehow still in pole position! Glee!

Lots of the artwork was genuine originals (though there were a few prints) which is always fascinating – you can tell things from original artwork that are invisible in reproduction, about tools, direction of brush or pen stroke, the evolution of the original, how large the artist worked. There was Deadline, Dredd, V, Bash Street and others on display, but my favourite piece was a tiny original from Commando comics; every line was perfectly placed, the true sign of someone who just does this (artwork), every day – the signature of the consummate professional. There was also a hole where some sheik had seen a page from The Killing Joke (on loan, not for sale) and bought it, money no object. Bizarre. 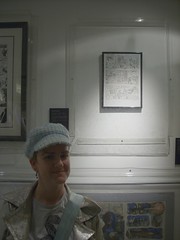 Afterwards we went to the pub where I caught up with Rich (Johnston, the Curator) and chatted to his man in Harrods about comics and things. He'd explained how it had been part of a wider festival of entertainment, and how he'd fought for inclusion of comics, successfully. How he'd expected comics people to turn their nose up at Harrods.

Not I, but then, I'm a sucker for the romance of large department stores, their glitz and hollow promises. 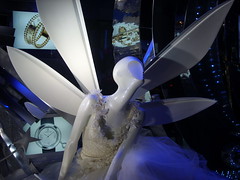