This morning, there were grey clouds thick with sleet, and, against them, a flock of pigeons appearing and disappearing as they banked and wheeled (I think they were mobbing a crow) and their pale breast feathers caught the low bright morning sun, and their slate grey back feathers disappeared into the lowering sky. I almost twittered about it, but those bits of my brain that were twittering have been outnumbered and shouted down by bits that suggests instead that my twitters might be annoying people. People do say that twitters are annoying, after all. Also, my hands were cold.

Lots has happened recently, including Oxford's Winterlight festival, watching Mamma mia, visiting a potential wedding venue, some very crazy dreams and a giant centipede licking sweat off my hand after I foolishly volunteered to hold it at the Natural History Museum. I squeaked, and handed it back to the nice lady etymologist.

We also put up the christmas tree: 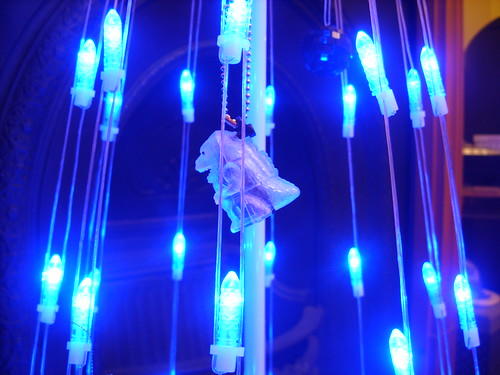 More shots on the click-through, although none (sadly) of Teasel the cat playing with a black mirrorball. Black cat against black grate lit only by blue fairy lights ... not on this camera.
Collapse