I didn't watch the Dr Who special, I watched Primeval's mid series shake-up episode instead (good choice), and then went out to the Burton Taylor (an approximately handkerchief sized theatre) for the first time since who-knows-when for a show called "John Cage's Disco Classics" during which

timscience got to pick the most beautiful biscuit and I got hit in the chest by a lemon, and then we went home in good humour. There's a fashion for going clubbing in tiny cocktail dresses this season which give drunken saturday streets an odd/posh vibe.

The rest of the weekend was more family/gardening orientated. I helped put some compost around a clump of agapanthus that had suffered in the late frosts and played football against/with a small child. There was also a lot of outright lies theorising about the Easter bunny following on from one of those questions; do you think there's just one easter bunny, or one for each country?

Also, as easter is time for baking, I baked cheesy dinosaurs. Observe their beauty! 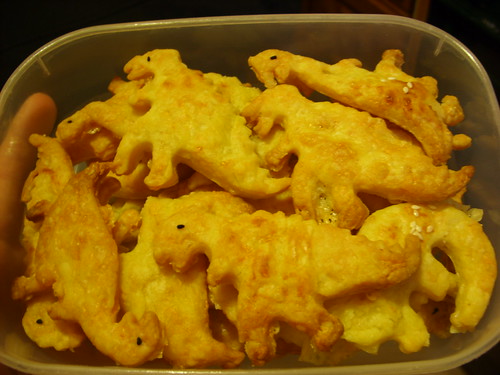