Good news, Whores of Mensa fans! The putative proceedings against us have been dispersed, thanks to a heroic, um, short phonecall by HERO LAWYER Kenneth P. Norwick of the Comic Book Legal Defence Fund. No longer labouring under the dark clouds of a Cease & Desist, we may now stand tall & write ... well, I'm actually writing something called Mores of Hensa but... no! Wait! It's better than it sounds! My co-whores

ellenlindner have other things on their minds right now, but we are all delighted.

The Oxford Punt, Oxford's annual punishing work-night new bands marathon. Discoveries of the night: Wild Hare Ale, currently on tap at the Wheatsheaf; enormously energetic two-piece Phantom Theory -- I'd been warned how loud they were, but not how good the tunes/vocals/guitars were -- and We Aeronauts, who invaded the audience while singing multi-part harmony, showing a level of concentration, guts and grit that had me thinking (along with the accordian and moustache) they'd be the perfect band for your Steampunk club night. The banter was sparse but effective; thanks to a guitarist filling in for the regular guy, who was off recording baboons. It's little details like that that reassure you a band has their priorities right.

... and also this week's strip, which is called Twitter Pubcrawl. Once again, I'm afraid, I've posted unfinished artwork -- no pretty colours, but, as a bonus, you can see that initially I tried to spell spam with a silent initial "p". Some bonus. Those who disapprove of twitter may be heartened to hear that the comic is an incoherent string of lame jokes, made by other people, completely unattributed, and dashed off in a few spare minutes.

Edited to Add: Following posting this picture, I've received a letter in my Flickrmail from a nice German man. Would you like me to pass it on, 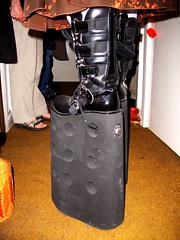