It's just starting to rain now, after a beautiful weekend of sun, sun, slight haze and more sun. Kind of shocking for a bank-holiday weekend. We went to Bristol for multi-venue city festival Dot to Dot. It had scaling issues, but I enjoyed it. Failed to get into the Louisiana but Marina and the Diamonds had cancelled anyway, so no biggy. Had some beer, sat in the sun. Bought the first 99s of the season,

timscience got his chocolate sauce everywhere, I prefer mine unadorned. Failed to get into the Cooler, Maps probably should have been in one of the bigger venues. Did get into the Thekla, saw Soft Toy Emergency, Kissy Sell Out and a band called Computer that were VERY LOUD and also are too hard to google.

Enough of that. I ate razor clams while hot air balloons flew overhead! Then we went to the O2 Academy, a very nice purpose-built venue which was unfortunately suffering some form of potty emergency. Bathed by a rather fecal smell, we watched Ladyhawke (Paris is Burning), then Friendly Fires (Paris). Took a break upstairs in their #2, a little atticky venue, we sat at the back while Fight Like Apes played, an occasional puff of hair visible above the crowd. Later I nearly bought their CD, which suggests that I liked them. Then nearly fell asleep until rescued by Future of the Left, the only band in existence which can soundcheck/adjust/tune onstage without annoying me, probably because they seem as pissed off about it as I am. Man, they're good. I went from zizz to mosh in half a song.

We then went back to the Thekla to laugh at the queue for Little Boots. Turns out there was real ale in the car-park, though, and the road outside is a great place to catch a cab home from. Thankyou,

badasstronaut for hospitality, tasty aubergines and muffins with marmite. This moomin is for you: 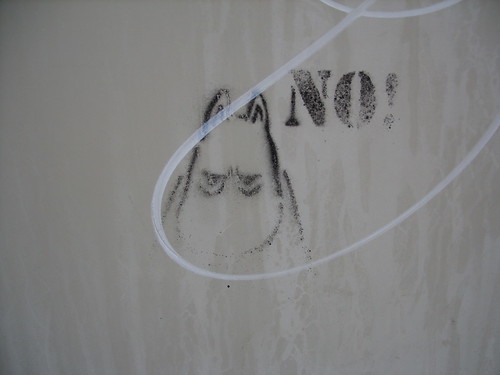