Last night's Nature Shock! was called Cannibal Hippos. It was a slightly unfortunate name, since throughout the docudrama they were acting like there was some enormous mystery going on, and every ad break, it was -- wait! Could it be, that they're dying becuase they're ... cannibal hippos? Actually, cannibal was I think overstating the case. It was more a case of occasional carnivores making the amateurish mistake of eating (bits of) members of your own species that have died of disease. Carnivorousness : ur doing it wrong. Carnivory? Anyway, the lesson, as delightfully communicated by a German epidemiologist with a troubling smile: if I had anthrax, and you wanted to have anthrax, the very best way would be for you to eat me ...

While I was cooking moussaka last night (no, I don't why either, but my parmesan bechamel sauce was a delight) Havoc kitty launched herself at the back of my legs and hung there, dangling by a single claw like a carolina duckling desperate to die (actually, that's a metaphor that will only work for me... and possibly

girlycomic). She does seem to get quite frustrated when I'm cooking. I wonder why? She also spent a happy time playing in the leg of my warm and freshly-discarded jeans at bedtime -- less inexplicable and painfully cute. THis morning she's batting a festival writband around the floor!

Havoc Kitty and Cat Shenanigans have started ganging up on me and demanding treats. On the one hand, I'm pleased that their bonding is progressing so well, on the other, the eyes! The eyes! 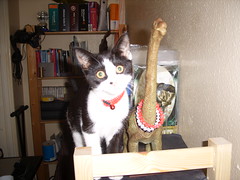 P.S. When confronted by a predator, some animals fight, others run while a few hide, hoping not to be noticed. The pebble toad of Venezuela does something altogether different: it curls up like a ball and throws itself down the side of a mountain: pebble toad's rock and roll life. Arachnophobia alert! This video clip also includes the Toad Eating Tarantula.