Half term, half term. All week juggling kittens and IKEA trips, tip runs (the hoover decided to let off some fireworks early) and chore blitzes. Grouting and digging and assembling oh my. I planted green manure! For the first time ever. And then there was my half term break, just two days this time as (after moving house twice and getting married) I have very very little holiday left over this year. I went to see sister and neiblings (the slightly younger dinosaur at my wedding and most recent neice). Well, I say saw. I did see them a bit. But we'd taken quite a list of things to do with us. 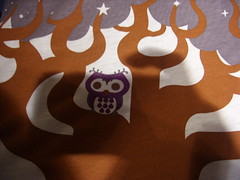 smallbeasts. Not this £80 t-shirt, though; a deliciously steampunk lamp and that bright red cog-shaped modernist fruit bowl we saw in Prague but would never have got home in one piece. 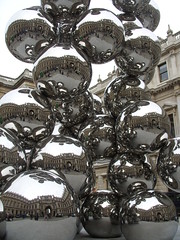 We also went to see Anish Kapoor at the RA, and ever since I've had this story unfolding in my head called "Anish Kapoor's Cannon Club" which alas really must not be written ever. I tried to photograph the spiders living in his 3-printed turdnests, but I was prevented. I wonder what they eat. Tiny modern art flies? Oh, and the Turner Prize: 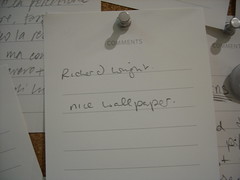 And the Turbine Hall. And Michael Clarke Company doing Bowie/Reed/Pop, about which I will not spoil, as it's on for another week and I'm fairly sure that others have yet to go. Two days of cold cures, well, a week of cold cures, really. When will I get better? Not yet. Here's the last of Owltober: 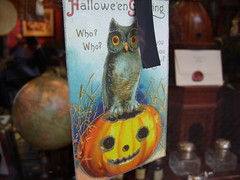 Fans of Harlequin might like to know that she caught Teasel's eye infection, and is now being bundled up in one of my more reassuring hoodies and having her eye gooped twice a day, while mewing pathetically. Or not. She's also started purring when things near her are stroked, which presumably represents some sort of philosophical crisis.

Also, good news on the house front! We took up a floorboard in the damp corner, and it wasn't a fetid space, writhing with slugs. It was dry, dusty, and empty save for a single ancient split pencil. Great! But also puzzling.
Collapse