I tried the frost underfoot today and decided it was worth trying the towpath on the way into work. By way of reward I didn't fall into the river, but I did see:

Magpies and magpies and magpies.
A mixed flock of Blue Tits and Great Tits.
Two winter flocks of Long Tailed Tits.
A cheeky Redwing.
A pair of sparrows foraging in a leaf-choked gutter.
That thrush again, ducking into the ivy.
An explosion of woodpigeons as I passed six foraging too close to the path.
Assorted gulls, mallard, geese, blackbirds, coot and a swan.

After that I wasn't expecting the walk home to stand out, but I was wrong. It was both brought forward a little and made enormously more exciting by the presence of snow! 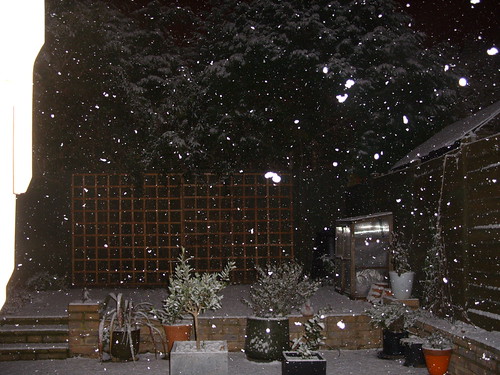 Falling snow fills the negative space of the urban environment, making what is usually air a mass of exciting whirling particles, suddenly visible in all its glorious three-dimensionality. This usually invisible and ignored space is suddenly given turbulent life and I see now that it is full of current and eddies, gusts and breezes, particles around which ice can form and fall. The disturbances to the flow caused by vehicles, trees, buildings is suddenly revealed, and as if someone had dropped dye into a wind-tunnel, the air becomes suddenly visible, tangible and real.