Good kitten. She held off on waking us up until 7.10am today, perhaps understanding the precious nature of a snow day. I was having a dream; we had been brought in to see if we could help a catatonic woman. I was a shadowy woman with dirty blonde hair and a forgettable face. My partner was Matthew Horne, who was acting like someone in the throes of violent PMS and wearing a badly buttoned labcoat. We discussed the accident; she had fallen over on rocks at the beach and not successfully regained consciousness. "Where was this?" demanded Horne, shoving his hand into a complicated gauntlet. The woman's partner, who was distraught, named a seaside town on the Welsh coast and it flickered into view on the floor, in faint 3d tracery, initially slightly abstracted and iconised in LED red/green, but as he guided Horne to exact spot of the accident becoming better rendered and more accurate until we could see the texture of the rocks, grains of sand, and the man's partner sat on a high rock, gazing blankly out to sea. Horne (visible in the abstraction in his travelling body as an angry labcoat with a big green glowing glove, held out like superman ahead of himself) could not see her, and said (again and again) as he examined the area, "she's not here!". For her part, she neither moved nor spoke but sat there, eyes on the horizon, as if waiting for a ship. "She's there," I said, "She's right there, on the rocks beside you." Horne, impatient, waggled his glove. "OK, OK," he said, "I'm downloading some updates which might fix my range." There was this strange moment of waiting, the woman staring out to sea, icon Horne fiddling with his glove, and the three of us stood in her bedroom, silent, the only sound the steady even breathing of the stricken woman. Then, "I've got her," he said, and started to run off into an explaination of how he'd downloaded a small-time seasonal search module that he was fairly sure she wouldn't be hidden from, though whether he thought she'd been hidden or had deliberately hidden herself I wasn't sure, anyway, she was coming back now, for what that was worth.

A kitten jumped on my head right then, but I woke up thinking about this very common fictional trope. Mine was dressed in up in Web 2.0 sci-fi pop culture drag, but there's a very similar scene in Lord of the Rings, among many, many others. As I got up and checked the snow (about 10 inches) it was in my mind as pipe dream nonsense, wish fulfilment for those left holding a breathing corpse.

But then I remembered S, a childhood friend who really did wake up three weeks (or was it a month and a half?) after a car accident. Obviously this is only true some of the time, and there's a raft of problems, and the better your medical intervention is the more likely it is you'll be able to save the person, and they may not come back the same, but there's a basic lesson in the story; before you give up on someone, find a person who knows what they're doing, ask them if anything can be done, and wait.

... and I shall now break the internet with cuteness. Sorry about that. Kitten didn't like snow at all, had to be rescued. Also, it was almost up to her nose. Poor little thing. 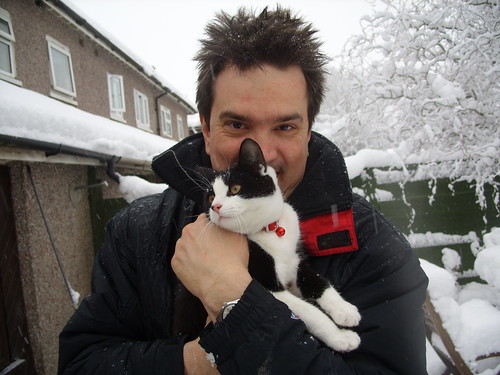 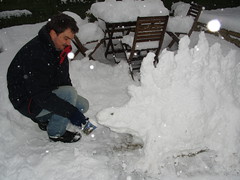