Day two of the snow is when you leave the house, start to move around, test your cold weather gear and find out what transport is still working. I tried a few different boots (settling on the sturdy vintage walking shoes I "borrowed" off my mother's husband about ten years ago), piled on the christmas knitwear and set off for the tow-path.

By the bridge there were foraging flocks of long tailed tits and redwings in the alders and willows, picking through next year's catkins as yet tightly curled. The river was seething with wildfowl and a few hardy rowers. I saw three mallards and a coot squabbling over an apple bobbing in the shallows; a gull joined them, shrieking that if there was food to be had, he should have it. 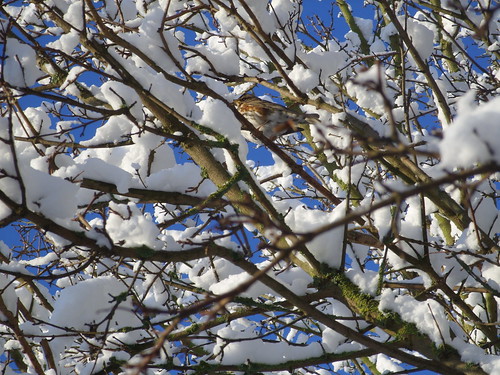 The real catch though, was lurking in the weirdly galled silver birch (the effect of Witch's Broom Fungus) where a clatter and a flash of green resolved into a green woodpecker! Which took one look at me and bolted across the paddock (where a solitary horse was sulking, under its blanket).

At lunch, I went out again, and nipped up the canal (juvenile Grebe, Pied Wagtails foraging on the broken ice of the canal, a Moorhen taking a snow-bath) to see if there was anyone ice skating on Port Meadow but there was no floodwater, so no ice, and no ice-skating, only people building snowmen as far as the eye could see. 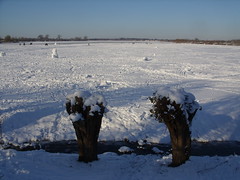 A Year in Bob Flowerdew’s Norfolk Garden by Bob Flowerdew, Thursday 28th January
An illustrated feast of the finest flowers, fruits, vegetables and the ingenious methods employed to produce them throughout the seasons.

Alas, the combination of having a big fat ZERO female gardeners speaking and being in the Saïd Business School has put me off mightily. Although, given that they're selling tickets at £45/series (glass of wine included, hopefully for each lecture) suggests that it's not me they're selling to, dearie me no.
Collapse