I've just seen my third 3-D film. I love it. I'm in love with a new way of seeing. They're like the old technicolour films, back when it was all just LOOK! COLOUR! WE HAVE COLOUR! and no-one was really thinking about plots or acting or anything like that. I do like that stuff, but I also like the purity of visual carnival and and look-at-me grandstanding. My third film was Alice in Wonderland. I suspect that my first 3-D eyeball plucking will linger in the memory. The last twenty minutes were rubbish but that's true of so many films I've stopped holding it against them, expectations permanently lowered. Oh, and I want a cheshire cat. Once again, I'm drawn to considering whether or not Harlequin would take dye, at least on the white bits. I suspect though that, while not expressly forbidden in my owner's agreement, it would be against the spirit of it. She'd never be able to make that and-a-bit-more grin anyway. In other news, I woke up last night just as I was falling asleep. I'd been dreaming that my eyes were full of buzzing bees. At the weekend she was stalking bees. I averted near-disaster when I came back in from doing the front garden to find she'd cornered a white-tailed bumble bee queen almost bigger than she was in the verandah. Some shooing was needed to resolve the situation without disaster on either side... 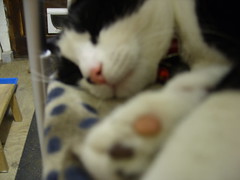 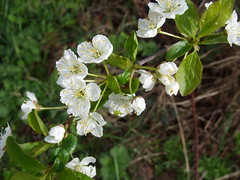 My mum was sixty-five last year; she spent four seasons, winter to autumn, trecking through the Lake District after sixty-five named tarns (and, inevitably, one Innominate Tarn). Throughout the year I got the progress reports, by phone, as I walked the backstreets or tow-path home at the end of every working week. I swapped tales of unexpected woodpeckers and regattas for her latest tarn conquests; "I've visited four more, but I haven't drawn them up yet." With humorous inevitability she made her sixty-five months early, and with half a book unfilled. I remember the conversation, and urging her to carry on, as she hadn't got to autumn yet. So, there are a lot more than sixty-five tarns in this book, alongside walks, poems, and a marvellously thorough index. I finally got to see it last week, when mum dropped by on her annual Tour of Daughters. We ate tasty pie and I flipped through the book, juggling a camera while the Brookes girls at the next table hopped in and out of their chairs, blocking my light with their tousled masses of just out of bed hair. This year she's doing paths less travelled, although she has yet to meet the full challenge; can they walk all day in the lakes without seeing another person in high tourist season? 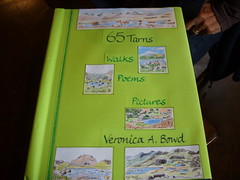 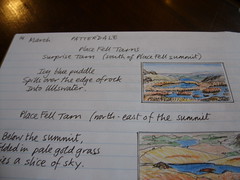 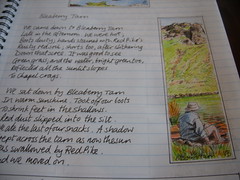 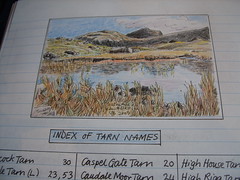 There's about nine photos on the click-through.
Collapse