Dreamed this morning we were in a joint initiative with the police to save the Playschemes programme*. We had to solve a bunch of puzzles in a playground to win large quantities of support from an anonymous backer so naturally we called Sherlock! in, who spent most of his time not saying anything as if I'd paid for an appearance by the Cumberbatch but not really a talking part. Anyway, he solved each elaborate, playwork-based puzzle with contemptuous ease, and at the end we put one parachute game parachute over his shoulders and another over a beehive-shaped climbing frame and up the rungs he stamped, foot over foot, one finger triumphantly stabbing the sky... and I realised that unless he stepped very very carefully he would plunge through the hole at the top of the climbing frame which was currently resembling the plinth on top of our ersatz dais. As he reached the top I realised his trajectory was not conducive to carefulness, and my heart jumped as he leapt with great vigour right into the middle. It was the moment that he tucked in his limbs like a diver that I realised he had known all along that this would happen and that, faced with opportunity for vast comedic bathos at risk to life and limp, he had found it irresistible.

*Bit of plausibility there 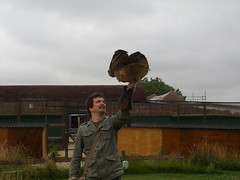 Also: this. Happy Thursday, have a rear view of an owl.