Sometime last Thursday I realised that lunch would be my last chance to relax for some days. On the grounds that dinner would likely not happen until 9ish and feeling frantic for some crumb of comfort, I headed off to Browns, greasy spoon of glory. Alas, a slightly anxious complex series of interactions lead to the angriest waitress in Oxford reducing me to tears. Embarrassing.

I was too wretched even to successfully read Robin Dunbar's How Many Friends Does One Person Need, which I've been reading in public places (for the irony, for the lols). I've just finished the chapter where a series of "lighthearted" "conclusions" are drawn from running some statistical analyses on lonely hearts columns. I must confess that I find myself hoping that I never end up stuck at a party listening to an evolutionary biologist because dear god the smugwallop is crushing at times.

Not that there haven't been a few decent insights, of course, including one I've found intensely personally liberating. I've just spent what was possibly the most satisfying comics convention experience of my life just saying sorry to people when I forgot who they were rather than blasting myself with guilt over it. Forget about it. There's a cognitive limit to how many people you can remember; Dunbar's number, 150, and no matter how I strain to push that up with tech, tricks and time-buying conversational blather, I'm still not going to push that much above 200, and my job cruelly requires about half that (and would probably absorb the lot given half a chance).

Heavens, though, it's sometimes an uphill struggle, particularly when he's on class or gender (inevitably, most of the time). I find myself constructing shadow narratives around his text, because while he clearly fears and distrusts those liberal, namby-pamby arts students (and at one point literally appears to be arguing that the world would be a much better place without them) he is, nevertheless, letting his viewpoint hang out and begging for its deconstruction; at which point (I suppose) I can grow my own insights in the fertile soil of the rich, successful, male scientist, writing for other rich, successful, male scientists. Including a possible answer to that age-old poser: why didn't I study science? Why doesn't everybody study science?

I chose not to read Dunbar on the long, weird bus ride where I was the only passenger on a darkened bus. Better not to tempt fate. I ended up working Saturday at a disabilities fair and started mulling the conundrum of caring. In the afternoon I hit the comics group and in the evening watched our weird city burn what appeared to be a giant effigy of Edwina Curry playing Isis the River King's daughter, as conceived by Dave McKean. Brilliant.

Then on Sunday I took my scalpel and turkish delight to Comica, where half the room was re-sampling the past and the rest was replaying the future. Andy "Konky Kru" Bleck came up with a sure-fire way for me to get rich (!) Rian Hughes told me the terrible tale of his mouse and his cleaning lady, and a certain person asked me repeatedly if I was broody. In response, I say: this is a picture of me holding a baby: 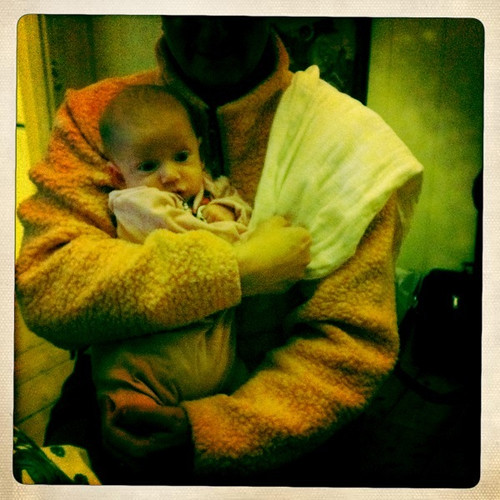 Concerned viewers may like to know that I didn't eat her soul, not even a little bit.
Collapse