Little Harlequin kitten (oh dear) had a milestone moment this morning, bringing in a diminutive Coal Tit from an autumn foraging flock. I ended up saving it twice; they always seem to go for rubbish cover when you let them chose it themselves. The second try I picked it up again and put it deep in a hedge. Tempted to hold on and have a look as I have never been that close to a Coal Tit before, but at that size they're literally constantly in danger of dying of shock (cold, anxiety, sudden collision with cat, etc.) so I put it back as quick as I could. Poor little mite.

Speaking of birds, the cygnets have finally flown the nest from the slightly sad swan family of Donnington Bridge. The smaller of the three left a while ago, but the two big boys had hung on as long as they could. One day, a fortnight or so ago, I'd noticed one of the two adults missing from the family group, and looked out for it as I went downstream. It was down a side-stream, and shot me a filthy look as I stopped to observe it and gave a rare mute-swan shout (a low hard noise like a goose, but less metallic) audible right through my morning mix on the i-pod, and very angry. From then on there was only one adult with the two cygnets (now both larger than their parents) until the day they finally flew off. Now the grown-ups are back together again: and the mute swans are at peace. 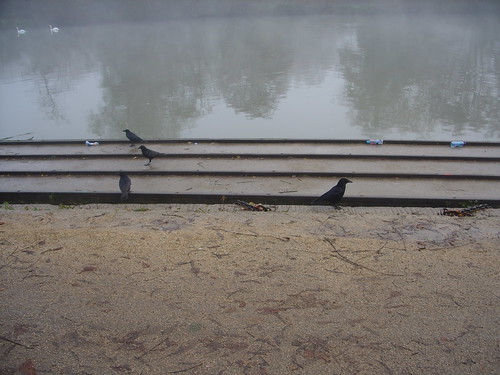