I took some days this week off work. Are you going somewhere? my colleagues asked. No, I'm staying at home, I said; and that is absolutely what have done, in a sense. But there's always a little more than that simple story. Just ask the cats.

Decrypting my recent past is a little complex, though, so I'll be dividing it up into a series of smaller updates. Suffice it for now to say that things have moved on, have changed. And yet they are also (in most ways that count) completely unchanged. I walk to work along the tow-path, my job is still paradoxically both more busy than it's ever been and really completely and totally deleted (as soon as the redundancy wave hits my level, yuh-huh), I'm drawing in the evening, gardening at the weekend and, oh -- I'll be getting your tenovertwelve compilations out next week -- and starting the summer comp, too.

Bits and bobs from the last few weeks:

Dot to Dot Festival. Urban festival in lovely Bristol, meaning we get to crash at

badasstronaut's after the headliners (Hurts -- a chilly electro duo whose live band included an opera singer) headed off into the night. The day started with margaritas among the hens and stags warming up in Millennium Square with the added attraction of a crowd (one in a hunter's cap, tweed and half-wellingtons) racing rubber ducks in the Millennium Fountain by shooting them with supersoakers. More highlights of the day included Niki and the Dove, Wolf Gang, Royal Republic and an incredible toilet (incongruously in an nigh-empty branch of All Bar One) which looked like it was modelled on one of the more tasteful Tardis consoles (possibly Paul McGann's).

The Jesus goose. There are things only pedestrians see. Observe the majesty of the godallmighty jesus goose: 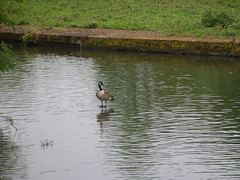 bluedevi broke up her balcony garden and left town for London (who has an exhibition on this weekend, if only I can find what channel she promoted it on -- got it, Core Gallery Open Weekend) have flowered, been pollinated and are now producing a handful of strawberries every sunny day (as long as I beat the slugs to them). I have no straw so I'm using willow twigs. The bees in the eaves turned out to be Tree Bees -- the dancing swarm of drones was quite spectacular on occasion, although I never got good video. The nest is winding down now I think.

Comics Scripting Workshop Quite well attended, this one; 100% women excepting [an ousfg veteran, can you guess who?]. The theme was "The Idea of the Century" and some ideas were certainly had; my brilliant idea was to include a reading list this time. Books about comics, eh. Well, there are some.

Nelson It's not a secret any more, so I think I can share generalities about Nelson, ambitious brainchild of Rob Davis and Woodrow Phoenix. Fifty creators, each team or individual looking at one day in one year of one life to create a biography of many voices, each contributing a mosaic fragment to build a story/identity/narrative. It's a wild ride; I'm torn between my desire to see what happens next and wanting to wait for the finished item. It is going to be shiny! More on my process later, as working with other people's characters is always fascinating, but I promise no spoilers.

CEOP Ambassador I am now certified to teach any age about e-safety. Just in case any of you should need that. The course was quite interesting, as these things tend to be; more on this later, too.

Listen to this In retrospect I probably should have badgered everyone I know into coming along to see this amazing evening of modern classical at the Oxford Playhouse, especially as it ended up with a bit of that quiet gig feel (friends, family, reviewers and me). It featured a clarinetist accompanied by electric toys -- a plane, digger, fire engine and police van pootling around his feet in a bleeping flashing brownian ballet -- and a cellist being pulled back and forth across the stage on a floating platform accompanied by car-horns and cow-bells, so we could appreciate his sound from every angle. Magical stuff.
Collapse