Went to my first "book launch" of the autumn last weekend, although it was more of a vodka-barbarella-costume party with a teensy bit of posing with books. I dressed as Shade the Changing Man (in

j4's amazing psychedelic suit), which seemed to be good for extra free drinks appearing. Paul Gravett dressed as Astroboy, complete with little red wellies (and won a tinfoil-wrapped prize), and the ladies parade was won by Space Cow -- in a full-body cow suit with tinfoil antenna! Watching Barbarella again, I was struck by its extreme slowness, and weirdly random acting; before it started, the compere explained to us that when it had opened, it bombed so badly that the call went out from the West End for something, anything to replace it, a film called If... was hastily substituted and the rest is ... anyway, here's a picture of

jinty dressed as Green Arrow, holding the book (1001 Comics you must read before you die), which you can order from Amazon here. 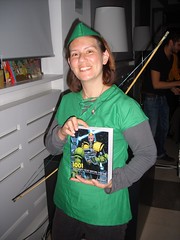 Next launch will be Nelson, an amazing multi-authored graphic novel biography, featuring such comics luminaries as John Allison, Philip Bond, D'Israeli, Woodrow Phoenix, Ellen Lindner and (incongruously?) me. I did a five page one day chapter set in 1996, which was a lot of fun for researching tech, current cultural references, haircuts, etc. You can pre-order that one off Amazon, too. I wonder if people are going to say it's a bit like "One Day"? It was all written before the film came out, honest!

Then we have the Launch of the Strumpet (previously Whores of Mensa) -- it's part of the Comica Festival and all are welcome. I've done a longer strip for this one called Project Paper Doll, which may feature geese and grumpiness. If you want a copy (beautiful full-colour cover, brand new strips by brilliant Patrice Aggs, legendary Megan Kelso, bizarre Tanya Meditzky and of course the lovely

ellenlindner) please take a moment to pre-order via Kickstarter ($10 for paper, $2 for digital) . If you've not used Kickstarter before, it's a system for group-funding projects using Amazon payments, and is very smooth to use; the pre-orders allow us to cover print-and-postage costs up front.

Last but not least will come Ink + Paper (a new comics anthology) . I don't have any ordering details on this one yet, but here's a sneak preview of my comic strip, The Incredible Calabroni Sisters, Twin Lady Human Cannonballs Extraordinaire (hmm, can you guess what it's about?):