Filling, preserving, staining, laying, clearing, cleaning, disposing. A fine autumn weekend? Time to try and preserve the physical integrity of the verandah. Everything taken out, the failed plants disposed of, and the inside draft-proofed with astroturf on the floor and newspaper and bags stuffed into every crack and crevice. Everything taken back in again and the outside waterproofed with cheap B&Q wood preservative. Doors reshaped and re-hung to accommodate autumn warpings and new floor clearance requirements. Holes repaired, spiders scared. The cats were initially nervous of the odd texture underfoot, but after they'd been fed in its near vicinity, they decided it was beneath their notice. More concerningly for them, I also cleaned the cat-flaps. Everything smells wrong! 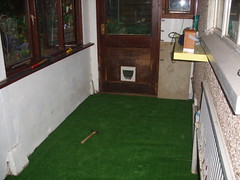 There's the astroturf. It was really cheap! I got a very cheap (read: unrealistic) turf but it was still on super offer. When we unrolled it we found were tack holes in it, which probably explains why it was quite so cheap. We have some left, which I may use to warm up the floor of the winter greenhouse.

We went to see the Three Musketeers 3d as a prize for astroturfing the verandah. Cinema tickets are pretty eye-watering nowadays, aren't they? Not that I didn't enjoy spending an evening watching Orlando Bloom and Milla Jovovitch locked in an insane competitive dressing contest, or goggling at Versailles in 3D, or marvelling at just how many scenes in one film could be improved by a swordfight (most of them, as it turned out) but the whole thing where 3D films cost double and they charge extra at evenings and weekends, when did that all come in?

The rest of the weekend I spent setting text for The Strumpet. It's all gone a bit star studded, with Megan Kelso, Lucy Sweet and all sorts. Feeling outclassed again! Oh, speaking of which -- Ink + Paper have a pre-order now, too. Autumn of comics, here we come.

Next up, next week. I have the trepidations.
Collapse