They were cutting the trees outside the Tate Britain. I love the way they look when they're chopped for winter, all chubby clubbed arms with the odd spike jutting out like a rough sketch of horns, or rude fingers. We cut through the gallery, checking the cost of Apocalypse on the way (blimey) and then wriggling through the modern galleries instead. I know I'm saying this about a lot of things nowadays, but I could go to the opera for that. The sky was clear, so we walked down the Thames. The Burghers of Calais always make me want to cry. Upright citizens in ropes and rags, their epic solidity dwarfed by the gothic cliff of parliament behind them. Not even the posies that Pankhurst (just around the corner) always seems to gather.

Across the river, we plunged through a German Christmas fair and then out into the concrete; on top of the Heyward Gallery, decorative windmills were spinning atop a clearly non-functional boat. We took a yellow staircase to the roof, which had been turfed and planted (in defiance of December) for a better view. There was an elf looking after the garden, who shared his views on modern architecture (not a fan) and then explained that the boat was called "a night to remember" and the experience for sale was booking it overnight. I waited for the artist to absent himself from the skyline (it had just been craned in the previous day, which must have been a sight to remember) and then snapped away. Insanity.

By the Tate Modern, they're roofing Blackfriars Railway Bridge. It will be covered with solar vanes that will shift (perhaps to track the sun?) and the station will be a) fabulously futuristic and b) hopefully a touch less confusing than it is at the moment. For now, though, it's under wraps. Inside the Tate, the concrete beach is open again, with children playing and couples lying on the floor in front of Tacita Dean's surrealist projected monolith. It's always a good pause; and then over the Millennium bridge to St Paul's, the Central line and away. Idiots have started affixing padlocks to it. I hope for bin-men with bolt-cutters to break up these profligacies of sentiment.

My neiblings are prodigious with snot and excitement, juggling winter colds and Christmas craft projects, scooters, biscuits and bikes. The small one is learning so fast you can see her building systems every time she tries something new; I read the large one most of a chapter of Artemis Fowl. My sister has taught him the term "antihero".

The next day we punctuate the capitalist excesses of Picadilly and Oxford Street with Russian constructivism at the RA. In the courtyard, the Tatlin Tower has been reconstructed in honest red girders, shocking inclusion in the paternalistic art environment, and much, much bigger than I expected. It pleads for a permanent home in a graffitied concrete park in a run-down part of a sporadically utopian New Town. But I suppose it would only get stolen and melted down for scrap. The shops and crowds. Spiderwebs of sponsored Christmas lights. The moist December air.

Eventually we crack and run for the Tube back to Oxford. Tim finds a South African deli tucked into an arch in Victoria and buys peach chutney and sausage for dinner. Somehow we get home and get everything home. Did I mention that we stopped off at the comic shop? They've brought back another character I liked, The Shade from Starman. It's the return to Opal City. A lot of naked men on comic book covers, too. I guess it's the 52 backlash.

It's just my imagination, surely, but does it seem a little lighter today? Town was eerie yesterday, all the Christmas markets packed up and gone and the streets not a great deal more crowded than usual. What has become of the spirit of frantic last-minuteism? Alhthough, at the risk of starting a stampede, Hotel Chocolat is expecting a delivery today...

Saw that Sherlock Holmes film yesterday. A lot of ecstatic antique weoponry work and a tragic end for a home-made scarf. Very much an antidote to the season, specifically to Stop the Cavalry. Goodness, actually, strangest thing. I made a no-Christmas-mix for the Christmas cocktail party and somehow Fairytale in New York got onto it.

timscience hypothesised some bastard child of itunes and Mr Clippy: You seem to be making a Christmas mix, let me add the following songs... (nooooooo!)

Speaking of the party, my friends are awesome; I present visual evidence below: 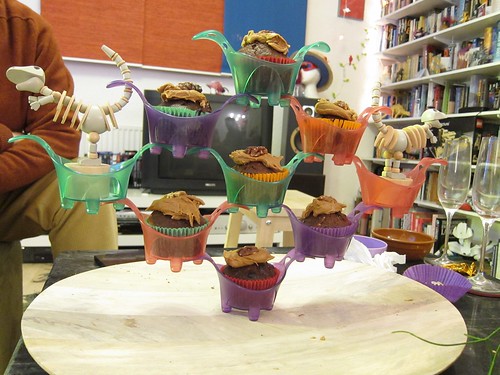