I have fleeced the passion vine. I have cloched the beans. But the real excitement occurred while taking down the neighbour's willow. The long central trunk flipped over the bark hinge, taking out half of my poor rhododendron in the process. I've packed it with bark and moss and wool to keep out the frost and it's just fingers crossed now. It'll rot or not. They're notoriously difficult to kill and (like my bottle bush) should never be allowed to set a single root outside the pot, but the toughest old bush can die on a split like this.

While investigating what to do about the damage, I ended up ordering grafting tape off the internet and seven M27 dwarfing rootstocks because well I'm pruning a marvellously delicious* apple tree next week and it's got to be worth a try. The Laxton's apple turned up; a beautiful, healthy tree of a seriously decent size, all wrapped up in shredded junk mail and black plastic: I'm going to need a bigger pot! 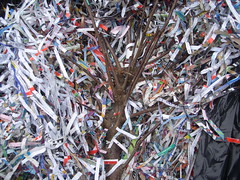 I also went to a Burns night where I discovered the heady pleasure of Port Finish whisky while discussing damp, restructures and astonishing exotic glassware. Rich and reeking! But enough of the hedonisms of trees and barrels.

*Not its actual name. I have NO IDEA what it is, so I'm going to call it a Jason's Orange until told otherwise.
Collapse