Had a dream the other day that a bunch of UK cartoonists got together and made a comic called Jubilee. I was doing a strip for it called "Britain needs more S.O.C.K.S." which (in case you hadn't guessed) was some sort of comedy spy pastiche -- the heroes were a gaggle of Hewlettesque caricatures -- Poppy Fiasco, Laititia, Mr Mod, etc. The muscle was a bluff spraytanned doorman-turned-trans(best to check with her), and there was a cheerful rotund professor whose name escapes me. Mr G.? It was rather New Avengers, to be honest, but I woke up with a smile on my face nevertheless. Odd thing is I'm sure that there was a comic called Jubilee. It wasn't the one that ran the BRITISH!!! type comics (like "The Striker wore Pink Knickers" -- a classic that should surely be resurrected and reprinted) but (I think) one of the sub-Dandy school-kid comics. But maybe I'm wrong. To the Googles! (no, google, not the X-Men character. Note to self -- check whether the comic that introduced Jubilee is worth anything, as it's in the longboxes... I feel OLD.)

Woke up this morning to the satisfying news from the French elections that the buffoon has been voted out and the politician voted in; maybe this is the beginning of something bigger, a bonfire of the buffoons. (Remembers the mayoral elections) (Maybe not) (Oh well) Speaking of which, Oxfordshire friends who have not yet done so should check out the results of our local elections; apart from the congratulations due to

monkeyhands for a very creditable showing in one of Witney's many districts, there have been some... interesting results. 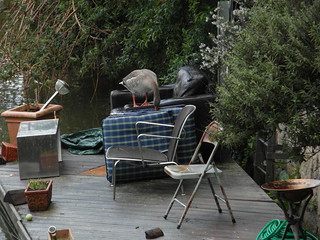