I walked past my dentist this morning and the place was empty. The Opticians below it was gone, too, if anyone was still using them. Furious, although apparently there's a dentist called Tim on Beumont Street (sic) who is keen to take me on, although I doubt it will be on as favourable terms as I had there. Furious. Not furious enough to go to Reading or London, mind (which are now my nearest branches). I wandered around town in a slight daze after that, seeing evidence of decay and recession all around. Are we doomed? I wondered, as I irritably discovered that despite the plethora of pound-shops in town (more evidence of recession!) there were no decent packets of spiders or worms (I'm a Halloween traditionalist, and like to give the kids a trick as well as a treat).

Speaking of Halloween, it was

glittertigger's party at the weekend, and I went as this: 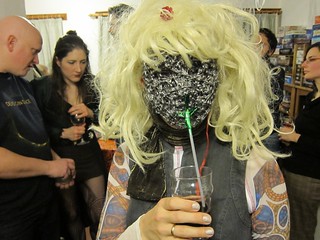 Also went to see Bond, which had a touch of the Topgear and Tory (there's a pub name to conjure with back away from slowly) about it. Some nice chases and action sequences, but it left me a bit cold, felt a bit like the first of a trilogy, didn't really pile it on hard enough or high enough -- perhaps the next couple of films will improve on this new iteration, I do like the idea of the desk team (MQMp) being much more action capable. Has the potential to bring the action home more. Kind of hilarious that the bad guy was Julian Assange, too (and it looks like Bond would also rather have wasps in his loft than Assange in his Flange).
Collapse