November flowers abound again this year (even though it's not unseasonably warm) so maybe they're always there and you just have to be looking. Alongside the usual round of late roses, etc., the last of the marigolds is flowering in my garden now. It is also the first of the marigolds, as all the others were snipped off by slugs before they ever grew. Next year I'll have to change my approach. Some neighbours seem to make marigolds work by sowing thickly, but I think that'll probably just make for fatter slugs.

I was in Oxford library and saw Nelson on the shelf! It's just won a comics award and is about to go into its third printing, and looks fair set to become canonical! If Grant Morrison's idea that comics gain significance by the fact that they are drawn over and and over by many people (hence the value of having a writer, and a layout artist, and a penciller, and an inker, and a colourer) has any merit, then Nelson is automatically a heavy-hitter, purely by the force of people writing and drawing over and over onto Nelson's life. Here she is, on the library shelf, coded, stamped and wrapped in a nice plastic jacket: 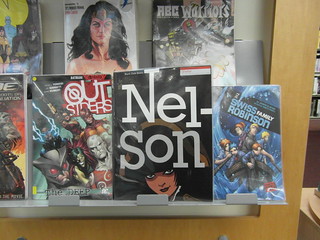