Thanks very much to all for your lovely birthday wishes/gifts/visits/tapas, you have all been fabulous (especially you,

uitlander, who have created a mysterious dinosaur muffin future). The reason why I've been spending the last couple of days doing little more than feebly pressing the like button is that I managed to do my stomach some damage somehow (my guess is the big lunch box full of left over tapas stored in a sweltering office for several hours) and I've been in a state of serious, collapsed, no comfortable position illness. I've now progressed to the irritable and cranky stage of illness so am practically healed. But. really.

Anyway, one NEW THING I did recently was visit a flower show, with

tinyjo and her mum. For various reasons to do with intense summer scheduling it had to be Hampton Court, which caused me a small stab of republican annoyance, but actually that turned out well as it's big on new and fancy varieties, flowers and blooms, and has a reasonable stab at conceptual show gardens -- all things I like. It was the hottest day of the year (again!) and the roses in the rose marquee were wilting as only the very best of roses can. I returned with some insane tomato seeds to try next year (including one that literally says "this will shock the neighbours" on the packet), a stunning poppy-flowered Abutilon and a tiny Tree Fern which is already unfurling happily in the humidity.

I recently found going to a flower show being used (I think by a Guardian columnist) as the ultimate expression of being no longer radical, I think in relation to some ancient rock star rumoured to be going to Chelsea. I disagree. I think that the time of the punk garden(er) is upon us. For anyone doubting the innate radicality of bloomage, see below. 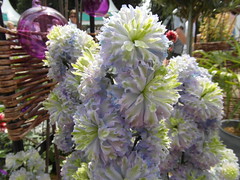 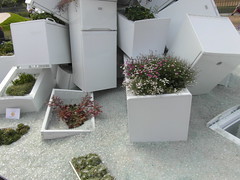 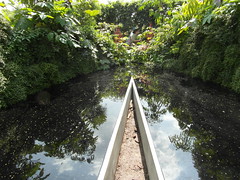 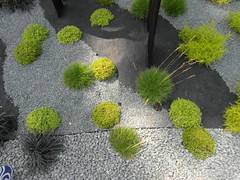 P.S. For anyone wondering if I do now know the answer to the life, the universe and everything, my mum very thoughtfully sent me a card with it in. It's ice cream, apparently.
Collapse