So; here it is. The final takedown. The comics con that sprang like a 90s weed from the neglected ground between the cracking paving stones of the official comics scene is over for 2013, and, indeed, and in all probability (though I refer you back to every year since the first one, as every one is the last one, as the song goes) entirely over. Often neglected, somewhat stumblish, stubbornly alive after years of being punted round from committee to venue to zine to blog to the history books and out again, Caption has always been the Con that will not die. But here I am setting its house in order again, and for the last time. Adjusting the screens and ending the scenes. Hail and Farewell, Caption. The tide has passed. 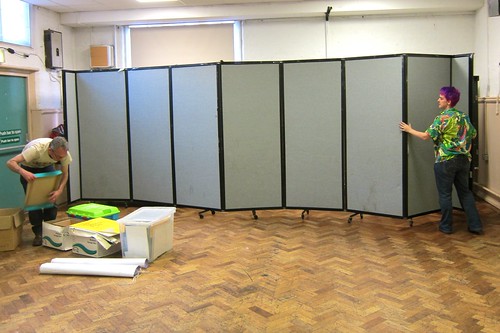 ...although, I hear rumours that some are planning a CAPTION resurrection in a seaside town. Ask David O'Connell (the other of the dramatis personae in the scene above) or, better, Alex Fitch, who has.... designs. After all, our original principles, as a I recall, were simple things, made to be copied, taken out into the comics scene and handed out, in the hopes that things would improve.

1. No barriers, no green rooms, no artificial separation between creators and fans.
2. No freebies; everyone pays, works, volunteers, helps or contributes in other ways.
3. Yes you can; create, get involved, draw, experiment, play, enjoy, talk, express, join in.
Collapse